Braden Becker has taken out the 2022 Sanwell Cottesloe Open played on Saturday 14 and Sunday 15 May, concluding with a sudden death playoff after tying at 11-under 133, with Brady Watt.
Michael Long won the Sanwell Cottesloe Senior Invitational for the Lyndsay Stephen Memorial Trophy, which played in conjunction, with 4-under 140.
Royal Fremantle’s Connor Faulds was leading Amateur and the Kelly Rogers Medalist with 4-under 140.

A big thank you to Member Chris Paino for on course and presentation photos in the following reports, along with first hand reports as to how the action unfolded. 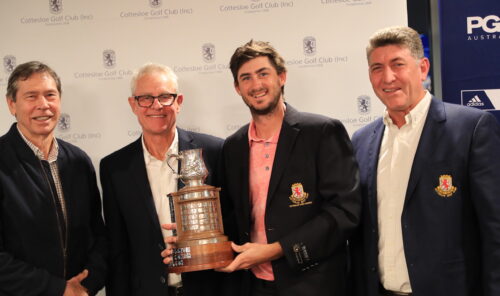 Spectators at Cottesloe Golf Club were treated to extremely exciting golf in possibly the most thrilling finish to a Cottesloe Open in memory.

Brady Watt shot five straight birdies on holes 3-7, and a further one on 11, and when the ultimate winner Braden Becker bogeyed 11 and 12,  Brady led Braden by 4 shots, seemingly in command. Further birdies on 16 and 17 got Brady to 8-under for the round, which was to become the course record at day’s end, however Braden Becker unloaded an amazing 6-under on the last five holes to tie at 11-under and set up a playoff. In the run home, Braden Becker was on 14th in two and a two-putt birdie resulted, holed from 15 feet for birdie on 15, dropped in an eagle 2 from 12 feet pin high on 16.

On 17, Braden was just short in two but secured a birdie. Brady, matching that in the same style, then led up 18, 11-under to 10-under. Brady drove a beauty and a second 12 feet behind the pin while Braden drove into the second right fairway bunker only to have the ball taken by a crow – sighted by a spectator. An official ruling provided a drop in the fairway bunker, where Braden put that 30 feet pin high and against all odds rolled it in for birdie no. 3. Brady stepped up for his birdie for the win, and 63 off the stick, however lipped out for his course record 64 and a playoff it was.

The players were carted back to 18 for the playoff hole, providing great theatre for the watching crowd. Braden Becker drove and landed a few feet clear between bunkers and then stiffed his second to three feet. Brady Watt had driven a beauty but put his second to about where Braden had holed from on the 36th hole. His try missed and Braden Becker stepped up and holed for a winning birdie and completing a run of an amazing 7-under in his last six holes played. 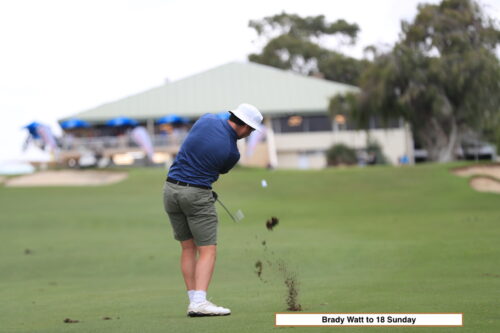 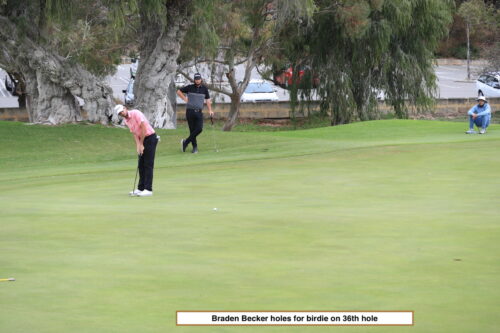 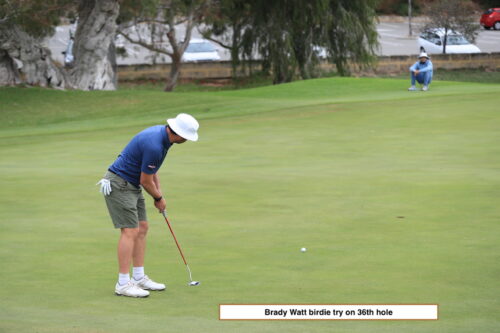 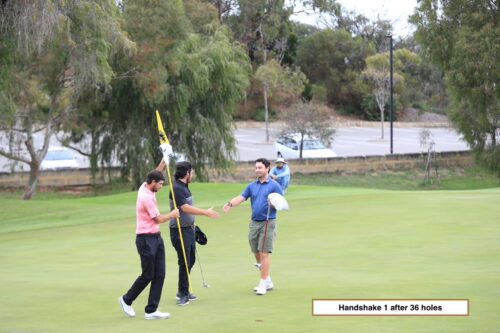 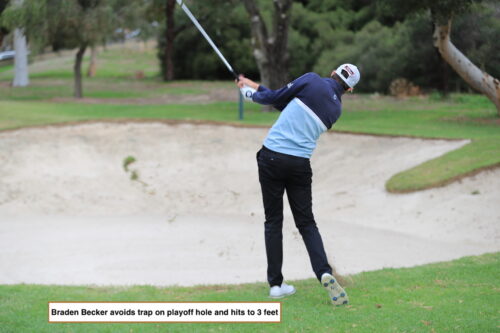 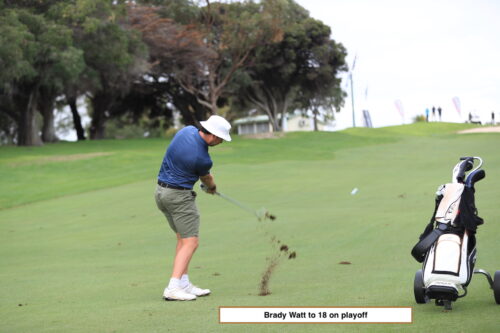 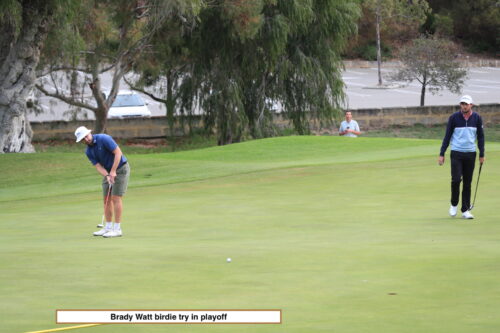 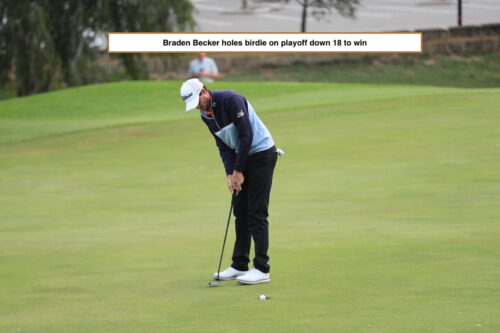 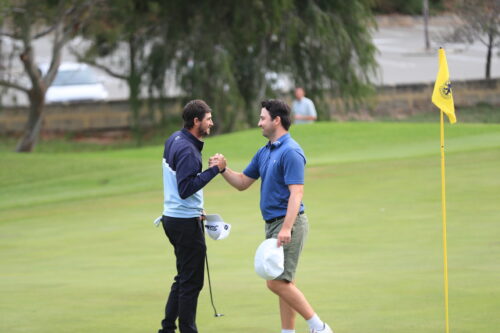 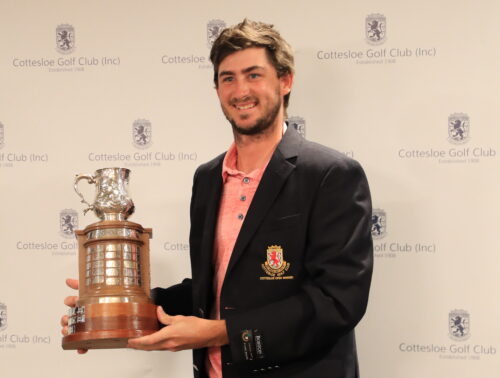 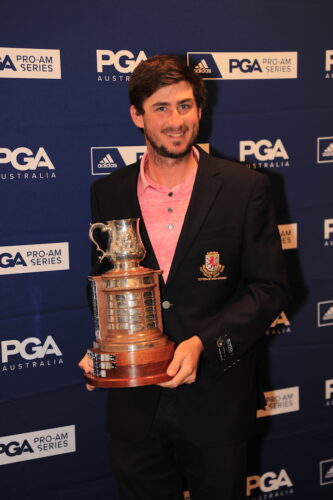 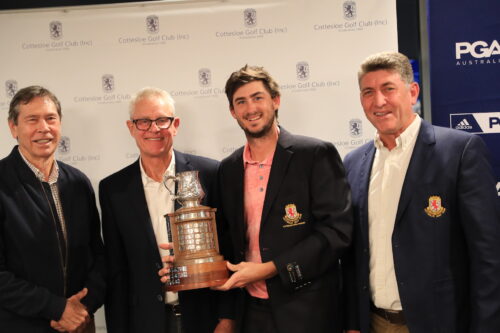 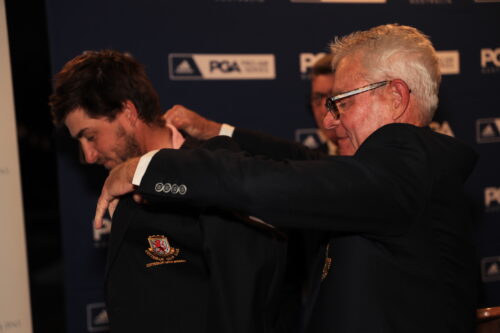 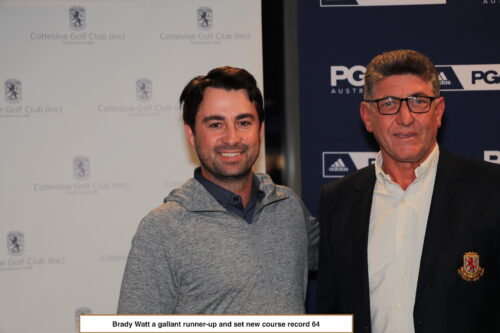 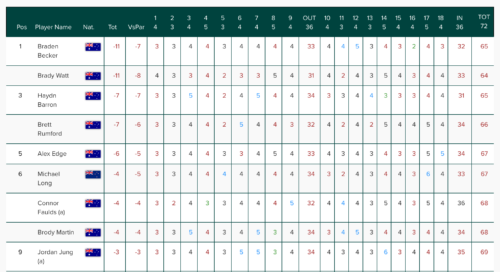 The Cottesloe Open does have some sudden-death playoff history of recent decades:
In 2003, three West Australians; Dean Alaban, Mal Baker and Terry Pilkadaris, all tied with 8-under and headed down the 1″ in the play off. All scored par and back up the 9th, Mal Baker was eliminated. The light faded out and the play off continued Monday morning with Alaban and Baker making par on the 10th and 18th holes. They then went down the first, the fifth playoff hole and Alaban scored a birdie to clinch the 2003 Cottesloe Open.

In 2006, Aaron Townsend, Dean Alaban and John O’Sullivan were in a  3-way playoff. They all birdied the first, Alaban bogeyed the second (up the ninth) and Aaron Townsend birdied the third playoff hole (the first) to win.

Scoring was very good on Sunday.
The official course record of 6-under 66 for the current layout was set 21 May 2021 at the 2021 Sanwell Cottesloe Open, shot by the winner Brody Martin and Brett Rumford. On the opening round Saturday, just two players Braden becker (68) and ultimate winner Brady Watt (69) broke 70. The scoring certainly  hotted up Sunday, with 13 players breaking 70. They included Brett Rumford matching his existing course record of 66, the winner Braden Becker and Haydn Barron breaking the existing mark with 65 and the new course record for the current layout being set by Runner-up Brady Watt with a 8-under 64.

The professionals competed for a purse of $30,000 made possible by naming rights sponsor, Cottesloe Member Fred McMurray’s Sanwell Plumbing and Civil, along with the support of individual hole sponsors. All sponsors enjoyed a great day out in the lead up event, the Sanwell Corporate Classic on Friday 13 May – a separate report on that day will be uploaded.

Cottesloe’s Men’s Captain Gary Harle conducted the presentations and thanked sponsors, players, staff and the many volunteers that contributed to another vibrant Cottesloe Open. Club President George Cordin presented the champion Braden Becker with the traditional blue jacket, always proudly worn on tournament eve at the Cottesloe Classic by past champions. 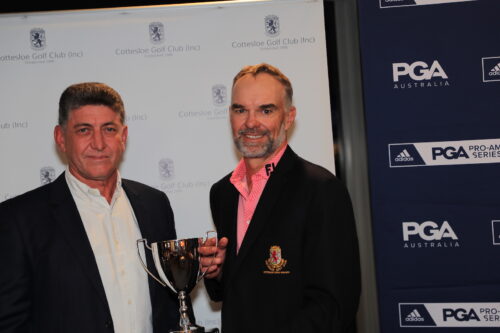 Michael Long continues to play very good golf indeed and his score of  4-under 140 ( 73, 67 ) saw him a winner by three shots from Peter Fowler on 143 (74, 69). Michael’s score of 4-under also saw him well up in the Sanwell Cottesloe Open itself, finishing a tied sixth.

Michael has now won three of the eight Senior Invitational events played, his three wins in succession 2019, 2021 and 2022, with no tournament held in 2020 due to Covid 19 impact. 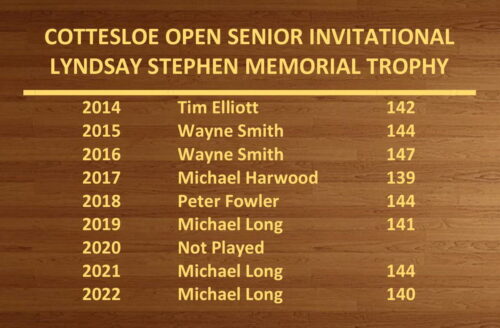 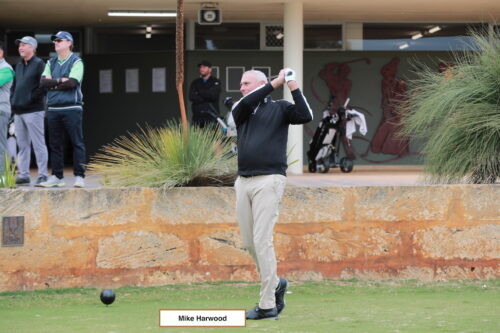 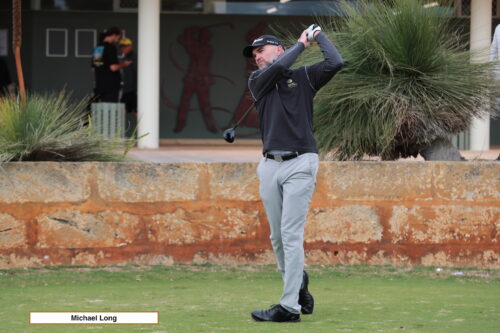 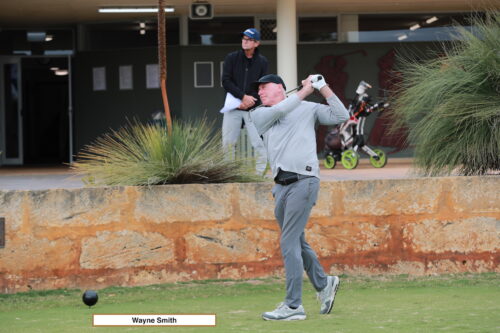 The Cottesloe Senior Invitational has been an important unique part of the Cottesloe Open since 2014 and continues to attract the cream of some of Australia’s great past champions, who continue to shoot very competitive scores. With the support of naming rights sponsor Sanwell Plumbing & Civil, the nine eligible competitors competed for a separate purse of $15,000, while also competing concurrently in the Sanwell Cottesloe Open.

The Cottesloe Senior Invitational, since 2021, has seen the winner awarded the Lyndsay Stephen Memorial Trophy. Popular local professional Lyndsay Stephen was a welcome and long-term competitor in the Cottesloe Open and sadly passed on 25 February 2021 aged 64 years 11 months. The ever-smiling and affable Lyndsay is missed by all in the golf industry.

Cottesloe is grateful for the sponsorship support of this Senior Invitational event, and also to be able to contribute to his memory in awarding the Lyndsay Stephen Memorial Trophy to the winner.

The event is well supported and while not an official Order of Merit Tournament for the vibrant Australian PGA Legends Tour. That tour is a vibrant year round Australian Pro-Am circuit that includes a qualifying school and Order of Merit. Participation brings lots of fun and interest for golf fans across Australia to play with or watch the champions of yesterday who can all still play at a very high level. It also brings opportunity and continued engagement in our great game for senior professionals proving again golf is the game for life. 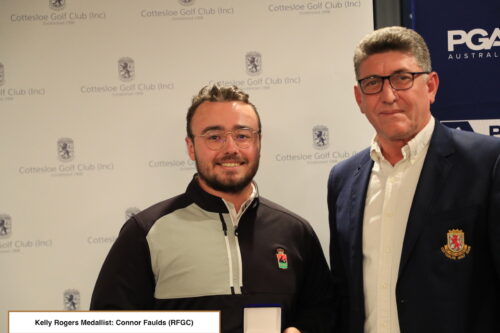 Connor Faulds of Royal Fremantle took out the Kelly Rogers Medal as leading amateur with a 4-under 140 (72, 68) and finishing tied 6th in the overall tournament. Scoring was solid from the leading amateurs and Connor won by a shot from Jordan Jung (Mt Lawley) and Joe Owen (LKCC) on 141.

Cottesloe’s Michael Hanrahan Smith was next on 143 (70, 73) to be the leading Cottesloe amateur, a closing double on 18 Sunday costly. Next best from Cottesloe was Grant Lewis 148 (76, 72). Our women’s champion Madi Ratcliffe was a special entrant as the only female. Madi played from the Women’s tees and after a tough Saturday with 86,  thrilled her Cottesloe fans charging home with a 73 on Sunday,  including 35 off the stick for her closing front nine. 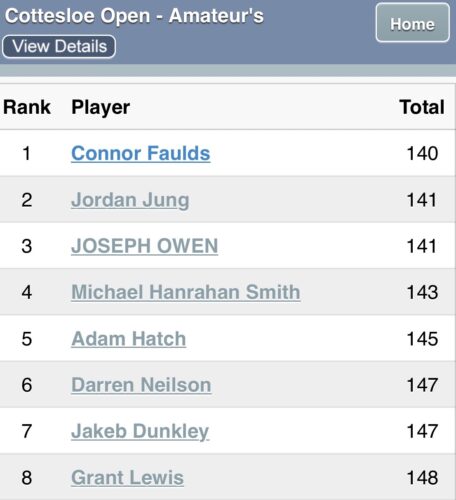 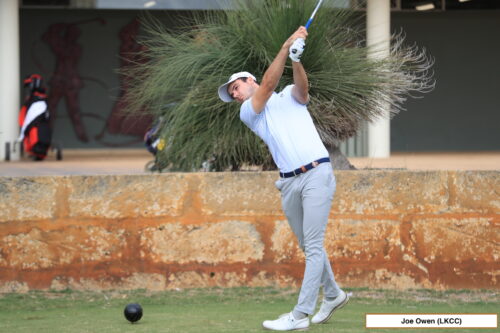 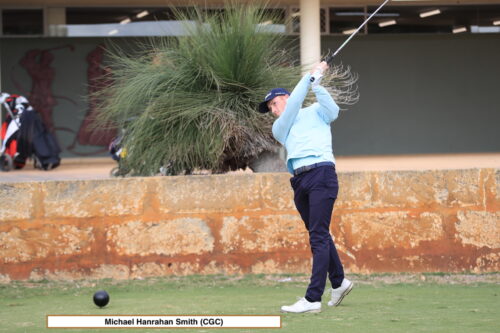 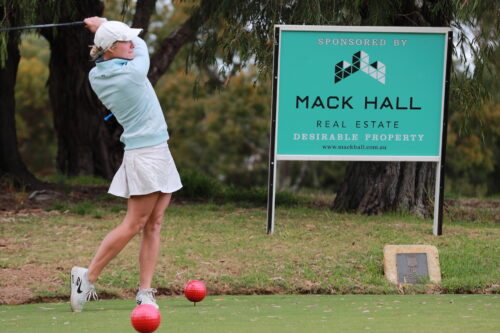 The Cottesloe Open is a well-supported event by amateurs with 43 starters in 2022. A state ranking event with points applying and the leading amateur awarded the Kelly Rogers Trophy and Medal that honours the great Cottesloe amateur Kelly Rogers, who is pictured below receiving the 1949 Cottesloe Open, one of his seven wins. 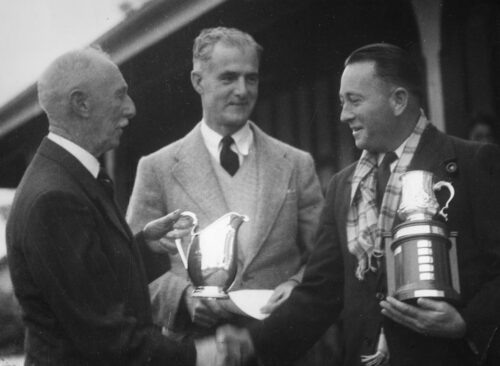 Kelly Rogers was a honorary Member for life of the club at the time of his passing at age 86 in 2002, and it was decided to perpetuate his memory by awarding the Kelly Rogers Medal to the best amateur in the Cottesloe Open from 2003 onward. The Cottesloe Open leading amateur recognition was a fitting choice, with Kelly having won the Cottesloe Open outright in each of its first four years from 1948 and seven times in all, up to 1963.

No greater tribute could be paid to Kelly’s playing longevity as a champion of the game than the thirty-one-year gap between his first Cottesloe club championship in 1948 and his last in 1979. Kelly was also WA Amateur Champion 1947/53/62, WA Open Champion 1953, WA Foursomes Champion 1953/66 and five times a state representative in a fabulous career.

As can be seen on the honour board following, some big names have been a Kelly Rogers Medalist since it commenced in 2003. 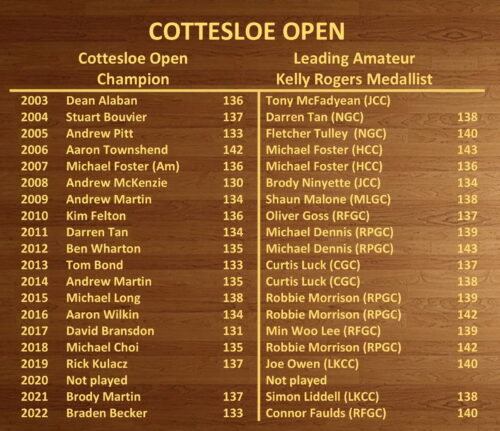 A hot scoring Cottesloe Open  with a Course Record, An Albatross and 12 Eagles:

A separate post CLICK HERE salutes our new course record holder Brady Watt with 64, an albatross shooter in Ryan Haywood and an amazing 12 eagles shot over the two rounds.